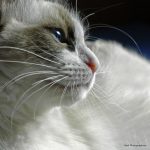 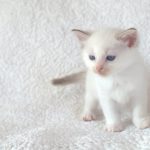 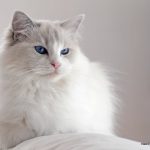 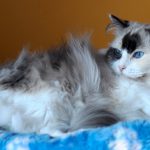 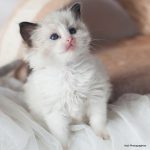 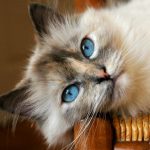 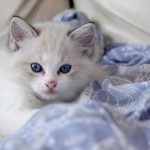 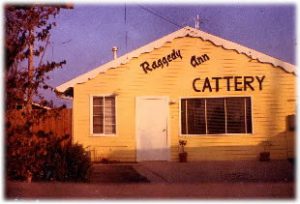 Everything about him has been told, that he is so unaware to pain to the point of bearing surgery without anesthesia, that he has a magnificent coat which never gets tangled, that he becomes when held as floppy as a pillow, may this site which is dedicated to him help you untangle truth from fantasy, myth from reality.

How it all began

The beginning of the RAGDOLL remains as deep a mistery as the behaviour of the cat itself. The recorded history is somewhat confusing and for some parts of it at least even proven to be pure fantasy. We know for certain, though, that the Ragdoll appeared in Riverside, California in the 60’s from the will of a woman named Ann Baker, and an ordinary cat called JOSEPHINE.

Josephine was a white, semilong-haired cat who belonged to Ann Baker´s neighbor Mrs. Pennels. Josephine was half feral and she often produced kittens. At one time Josephine was hit by a car, was rescued at the local university and nursed back to health. During this time Josephine had to stay indoors and she became obviously tamer.

Josephine´s previous kittens had been half wild like their mother, but after the road accident they were quite the opposite. They were very relaxed and social, a real nuisance according to Mrs. Pennels. It is not quite clear what exactly was so  different in those kittens and how they came to be that way. The story doesn’t say. Theories on a would-have-happened genetics mutation either experimented at the university or induced by the car hit are unfounded. In any case Ann saw something so special about the  kittens that she eventually decided to use them to create a new breed.

Ann acquired two of Josephine´s kitten: Buckwheat, a black female that looked somewhat like a Burmese and a pointed bicolor she called Raggedy Ann Fugianna.  Fugianna’s father was mitted Daddy Warbucks, a son of Josephine as well, owned by Mrs. Pennels. All these cats were Josephine´s offspring, but they probably all had different sires. Daddy Warbucks had the impressing appearance of a Birman with a nose blaze and a white tip on the tail. These three cats are the foundation stock of Ragdolls, for when  Josephine had her next litter, the owner´s husband for a row between Josephine and his dog,  killed mother and kittens.

When the breeding programme was well established, Ann Baker did something unheard-of in the world of cat fancy; she trademarked the Ragdoll name, every kitten sold would bring back royalty fees. Ann Baker would rule all the Ragdoll world with an iron hand, and started stating genetics and cosmologics deliriums, claiming Ragdolls were linked with human beings, raccoons and even space aliens!

The RFCI comes to life

Tired of the drastic breeding requirements Ann Baker demanded, a group of breeders who fortunately had obtained their Ragdolls before Ann´s breeding policies were implemented, decided a secession. The most emblematic figures on this were Laura and Denny Dayton. The Ragdoll Society, which was later changed to the Ragdoll Fancier´s Club and then to the present Ragdoll Fanciers Club International <a href= “http://www.rfci.org/”>RFCI</a> , was founded in 1971 to promote the breed in the cat associations and in shows.

First Ragdolls were exported overseas in 1981 when Laura and Denny sold almost all their breeding stock to Lulu Rowley and Patricia Browsell in UK,, but the introduction of the Ragdoll in the pedigreed-cat world has not come an easy way.

Ann Baker died in 1997, feeling bitter and betrayed. The Ragdoll trademark and IRCA remained active after her death along with the breeding rules, but the  number of breeders working under this label is dwindling, most breeders working now with RFCI.

Ragdolls are now accepted by most cat associations and with the increasing interest in the breed, the future of the Ragdoll cat won’t lack of prospects!

As the number of breeders in Europe is on a growing spurt, it has become much easier to fing the raggie you’re dreaming of. Let’s hope now the beautiful disposition Ann Baker emphasized so much in this gorgeous and Oh so sweet! feline will not be sacrified in the name of quantity.

What should, first and overmost, be a Ragdoll?

In Ann Baker’s own words, Ragdoll first is a disposition.

Size is the second, ragdoll seconds the maine coons, the biggest cats of the feline fancy The markings, inverted “V” and mitts are only a “decoration”, they can’t define a ragdoll in his whole.

Sorry for several (if not every single but a few) fancy judges who will find so easy to elect a small sized nervous perfectly marked ragdoll instead of a huge gentle giant with a misspot.

No white allowed for the colourpoint. Mask, ears, legs and tail (ie points) are the basical colour of the cat and very dark, the body is a of a lighter tone.

As his name states it the Mitted ragdoll wears precious white mittens on front legs matched to white booties on hind legs. The most stylish ones show a white hourglass on the nose called blaze. It is an undeniable mark of elegance.

The bicolore shows a mischievous mask of raccoon consisting of an  inverted white “V”. Legs and belly are snow white. Some bicolours express more or less of white, according to their genetic heritage.

Coat colours of the ragdoll

The ragdoll may display a rainbow of colours, but it is quite straightforward though.

Like the siamese the ragdoll has 2 colourpoint genes, his body is lighterly coloured than his extremities.

He has three basic colours, seal, chocolate and red. Those colours come undiluted (beforenamed) and diluted into blue, lilac and cream. The lynx gene may come display delicate stripes on all those dresses. Some rare variants can be found sometimes.

You’ll find along the photos of the site our cats’ dresses and if you want to know more very extensive information on the web.